Ashanti Net Worth: Ashanti is an American singer-songwriter, record producer, actress, model, and dancer, who has a net worth of $20 million US as of 2022. She started her music career at an early age and with time Ashanti became one of the most popular celebrities in the music world. She had an extremely successful career and has managed to earn stardom in both the music and entertainment industries.

Ashanti has released 5 studio albums and one of her albums called Chapter II, became commercially successful, making its Billboard 200 debut at the first position. In the first week of its release, the album has managed to sell more than 326,000 copies, which is quite impressive.

Apart from that, Ashanti has made appearances in several television shows and films such as she earned recognition with her roles in John Tucker Must Die, Coach Carter, and Resident Evil: Extinction. In this post, you will find the total net worth of Ashanti her salary, income sources, career, biography, and many expensive things owned her. Contents

Ashanti was born Ashanti Shequoiya Douglas on the 23rd of October 1980, in Glen Cove, Long Island, New York. She was raised by parents whom both were involved in the music industry. Her father Ken-Kaide Thomas Douglas is a former singer while her mother Tina Douglas was a dancer as well as a dance teacher. Her mom named her after Ashanti Empire which ruled Ghana between 1670 to 1957.

While growing up with musical parents, she developed an interest and started singing at a very young age. Ashanti’s musical talent was first discovered by her mother when she overheard her singing Mary J. Blige’s single, at the age of 12. Her mother saw her passion for music and then helped her to pursue a career in singing. However, she first got a chance to play roles as a child actor in several films and a couple of minor appearances in various music videos.

Ashanti attended Glen Cove High School, while studying there, she started writing songs. At the same time, she performed at several local parties, occasions, as well as talent shows. She is one of the most hard-working singers in the music industry who struggled a lot to find success in music in her teenage years. Ashanti grabbed the attention of several music labels but was not able to sign a deal. She started performing in and around New York City and continued hanging out at the Murder Inc. Labels to be signed.

Shortly after, Ashanti grabbed the attention of Murder, Inc. producer Irv Gotti who motivated her to write songs for his artists and sing on their singles. She earned recognition after appearing in the background vocals of Big Pun’s track How We Roll and then Cadillac Tah hit singles Pov City Anthem and Just Like a Thug. Ashanti’s first notable work was her appearance on Fat Joe’s hit track What’s Luv? in the early 2000s. In the same year, she featured on Ja Rule’s track Always On Time. Both of the tracks became successful by making 2nd position on the charts.

In 2002, Ashanti came up with the release of her first single Foolish, which was a massive hit lead single from her upcoming album. This track made its place on the top of the Billboard Hot 100 for 10 weeks. Later that year, she dropped her self-titled debut studio album Ashanti, which also became a hit like her debut single. The album was a commercial success selling more than 6 million copies globally as well as topping the Billboard Top 200. Ashanti has managed to earn several awards for her debut project, she received 8 Billboard Music Awards, 3 American Music Awards, as well as a Grammy Award.

Ashanti’s second album Chapter II was released in the year 2003, but it was not as much success as her debut project. The album still became platinum-certified and included one of the hit tracks titled Rock Wit U, which peaked at number 2 on the charts. In December 2004, Ashanti released her third studio album Concrete Rose, which also became successful by earning platinum status and received a lot of success in the UK with the hit track Only U, reaching #13 on the Billboard Hot 100.

In 2008, she released her fourth studio album The Declaration, but it was not impressive as her previous works. The album, featured the single The Way That I Love You, which reached number 2 place n the charts. In the following year, Ashanti decided to left Murder, Inc. Records and later launched her label called Written Entertainment.

In 2011, she began dropping singles from her upcoming fifth album, Braveheart. The album included some popular singles such as The Woman You Love ft Busta Rhymes and No One Greater featuring Meek Mill and French Montana. On March 4, 2014, Ashanti eventually released her fifth studio album, Braveheart, which earned optimistic reviews, from music critics, for its progressive music.

In 2016, Ashanti came up with the release of her popular mixtape called The Hamilton Mixtape. In the very next year, she collaborated with the famous rapper, Ja Rule to release her seventh studio album. In 2019, she began dropping singles and teamed up with Afro B on Pretty Little Thing. Apart from all that, in November 2003, Ashanti released the Christmas album called Ashanti’s Christmas, which became a commercial success.

The singer also has written the hit song Ain’t It Funny (Murder Remix) for Jennifer Lopez, and it would go all the way to number one on the Billboard Hot 100.

Apart from being a successful singer, Ashanti is also a well-known actress who made her theatrical film debut in the 1992’s movie Malcolm X which is a biographical drama. But in the entertainment industry, she first earned some recognition for her appearance in the comedy-drama film, Bouge! in 1997.

In 2005, Ashanti took her acting career more seriously and made her feature film debut in the teen sports drama Coach Carter. In this film, she played the role of Kyra alongside actor Samuel L. Jackson. That same year, she became a cast member of the musical fantasy film The Muppets’ Wizard of Oz, which garnered over 8 million views on its premiere. Ashanti then made her appearances in several films including, John Tucker Must Die, Resident Evil: Extinction, Stuck, Mothers and Daughters, and many more.

Aside from movies, in 2002, she made her television debut in Call Me Crazy an episode of the comedy-drama series titled Sabrina, the Teenage Witch. After that, Ashanti starred in television series including, American Dreams, Buffy The Vampire Slayer, The Proud Family, Law & Order: Special Victims Unit, Unforgettable, RuPaul’s Drag Race, Murder, and Dynasty, among others. In 2013, she landed a recurring role of Latasha Monclair / Latasha Durant in the drama television series Army Wives.

Ashanti started dating famous rapper Nelly in 2003. The two have dated for almost 10 years, and they broke up in 2012. From 2013 to 2015, she was romantically involved with DеЅеаn Јасkѕоn who is an Аmеrісаn professional fооtbаll рlауеr. Then she was in a relationship with Darnell Dockett around 2015. In the following year, the two split up.

According to reports, Ashanti also had been in a relationship with basketball player James Harden from 2016 to 2017, and later was linked with Nas from 2018 to 2019.

The Grammy-winning singer Ashanti owns many expensive cars such as the Mercedes Benz SL, which cost around $89,195. The second car in her garage is the second-generation Cadillac Escalade EXT, the price of the car is around $71,000. Ashanti is among known American celebrities and she has a Rolls Royce Ghost, which is the most expensive car in her garage the cost of the car is $450,000. The singer has a customized Mercedes Benz CLS-Class W219. It is one of the most incredible machines which cost around $50,000.

Ashanti is the owner of a luxury house which is located in the small community of Old Westbury in New York. The house is spread over 5000 square feet and sits on a three-acre of land the mansion has four bedrooms, five full bathrooms, a living room, a modern kitchen, a massive swimming pool, a spacious garage, and lots of other features. The price of this house is not revealed until she spent millions of dollars.

Ashanti is also a model and appeared in various television commercials for brands including, Clairol Herbal Essences shampoo, Pantene Pro-Voice Ad, and CÎROC Ultra-Premium Vodka, among others. She signed an endorsement deal with brands such as Bijules, Bellydance America, Amato Couture, AMEN., Alice + Olivia by Stacey Bendet, etc. 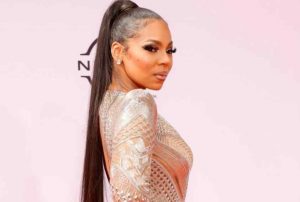 As of 2022, Ashanti’s Net Worth is estimated to be around $20 million US. She is one of the most popular R&B singer-songwriters, in the music world and has released several hit tracks throughout her career. She made a pretty handsome fortune for her acting career, album sales, and live performances.

The singer made around $3.6 million from her debut album Ashanti which was certified Platinum two times and had $1.1 million from her second album Chapter II. The hit song Foolish, the lead single from Ashanti’s first album, peaked at number 1 on the Billboard Hot 100.

Apart from music, Ashanti also has made appearances in several television shows, and films, that includes, John Tucker, Must Die, and Resident Evil: Extinction. Her huge net worth has enabled the singer to live a luxury lifestyle. Ashanti’s annual salary is more than $1.5 million which comes from various sources. She has accumulated a vast chunk of money throughout her successful career.

How much is the worth of Ashanti?

Ashanti’s Net Worth is currently $20 million.

How much money does Ashanti make?

How old is Ashanti?